“Snow is not frozen rain. Snowflakes are created inside clouds by tiny ice crystals colliding and sticking together. Most snowflakes melt on their way to the ground and fall as rain. Only when the air near the ground is cold enough will snowflakes fall as snow. All snow crystals are six-sided (hexagonal) and no two snow crystals have ever been found to be identical. Some snowflakes can grow to be 5-7 cm (2-3 in) across. When fresh snow is moist enough to stick together, snowrollers may form on hillsides or in large fields. A ‘snowroller’ is like a cylindrical snowball in shape and is blown by winds of more than 32 km/h (20 mph) until it grows too large to travel any farther. Snowrollers can reach nearly 1.5 m (4 ft) in diameter.”    BBC Weather

The ‘Snow’ Angel of the North ~ This is my favourite snow image so far…. what’s yours?

A snow angel is a human-made depression formed in an area of snow in the shape of an angel. On March 28, 2007, Guinness World Records confirmed that North Dakota holds the world record for the most snow angels made simultaneously in one place. The record breaking event occurred February 17, 2007 when 8,962 snow angels were created by people waving their arms while lying in the snow covering the state Capitol grounds in Bismarck. Wikipedia 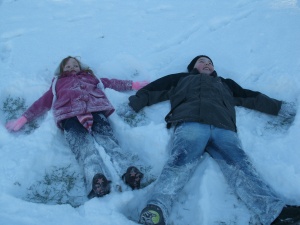 My Very Own Snow Angels!

What do you think this week’s image is? The answer will be shared next Wednesday ~ all correct answers will be retweeted. Post your suggestions below, using the ‘comments box’. Good Luck!

Name the Building ~ you have until next Tuesday when the answer will be revealed…..

Posted in Interesting Finds, We're interested in what YOU have to say ...

The recent unveiling of Michael Gove’s ‘Education White Paper’ has recommended a whole host of changes to Education as we currently know it. Some have been controversal such as the loss of funding for sports – which in light of the upcoming 2012 Olympics does appear to be a tad short-sighted. Others are linked to improving the quality of the learning experience for students, which can’t be a bad thing.

One suggestion is that soldiers will be encouraged to become teachers in schools across the UK:

“Former members of the armed forces are being told, in Lord Kitchener style, that their country needs them.

But, as set out in the government’s education White Paper, they are not being asked to return to the front line but to train for the classroom.”

As the daughter of a 22 year service soldier, I know first hand of the skills & experience that skilled trainers can bring to education, my Dad never gave up on any of his ‘students’ until they had passed the course. However important it is to have a good relationship with your students (which it is by the way), I also believe it is the quality of the teaching which counts especially for high achieving students, they need an educator with extensive subject knowledge who can stimulate the learning in their chosen subject and if that person is an ex-soldier then that is great. It’s never going to be a ‘one size fits all’ situation and as long as it is the needs of the students are at the centre of the changes and not finances then I will reserve my judgements for the moment….

It does seems to me that some of the changes do appear to make sense on the surface but without the Government having a clear understanding of the impact of some of the proposed changes it could be a deemed that they are ‘throwing out the baby with the bath water’. For example, just because someone has a high 2.2 degree, it doesn’t mean they will necessarily be an excellent teacher – so why penalise those with lower graded degrees ? Some of the greatest teachers I have worked with in the past have had ‘lower graded’ degrees for a variety of reasons, mostly financial; such as single mum’s putting themselves through their degree whilst supporting themselves and their families through a network of part-time jobs. Surely these dedicated ‘future teachers’ should be encouraged as they have the dedication and drive to make sure they become teachers – yet they don’t really figure in the White Paper at all – why is that?!

One final thought what about those schools who struggle to recruit ‘quality staff’, as a Deputy Principal in a secondary Academy (in a previous job), we constantly struggled to recruit to key posts, despite offering significantly more money and other ‘perks’. Instead at the start of each academic year we were often faced with putting ‘sub-standard’ staff in front of students in order to avoid cancelling lessons. How will the White Paper address this issue, which was not isolated to the school I worked in, by introducing the restrictions to Initial Teacher Training programmes and so on?

Posted in Education, News, We're interested in what YOU have to say ...

“A picture of schoolgirls peacefully stopping attacks on a police van during this week’s student demonstrations sends out a powerful message of hope and defiance.  The image reveals that most protesters are peaceful, idealistic, with a sense of history and of the gravity of their actions. Most of all it tells us how amazingly young many of them are.”

Check out the full article (including the picture) here: Student Protests

Surely this is the type of ‘news worthy’ protesting that we should be encouraging to get across the right message, without violence ~ don’t people say that ‘a picture is worth a thousand words’?

Posted in News, We're interested in what YOU have to say ...

What is this week’s image of and where can it be found?